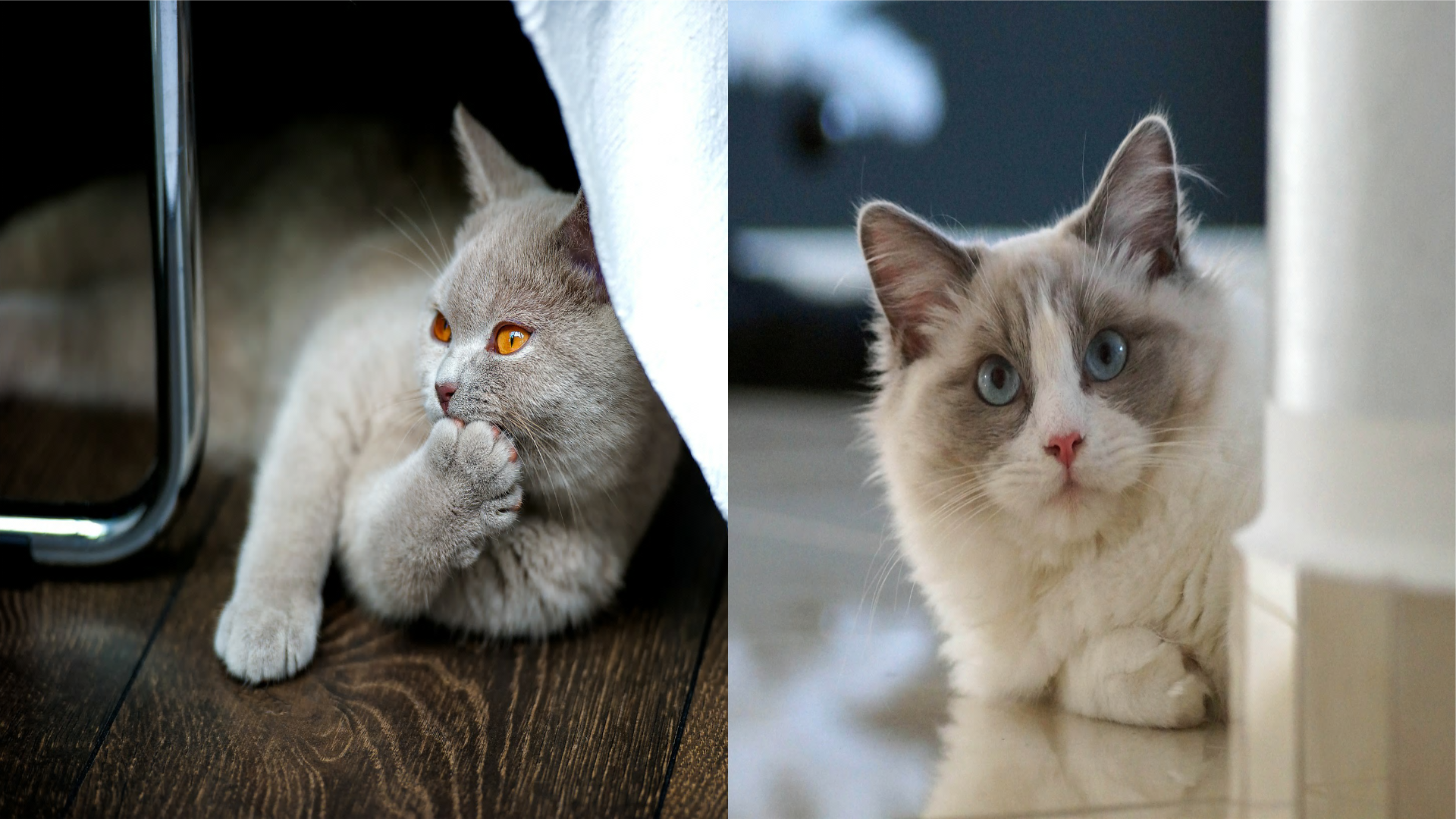 The Ragdolls captured my heart with their fabulous blue eyes and amazing gentle nature. Their luxuriously soft fluffy coats whilst sharing the look of a Persian do not need as much maintenance as most long-haired cats and their bodies going limp as a Ragdoll when you pick them up fascinates me.

Our cats come from Champion Blood Lines, free of genetic and hereditary disease, and have a health guarantee. Our Ragdolls are our pets and we take pride in our breeders which come from reputable catteries free from genetic disease and are the homes of champions, Our kitties personalities and health is top priority.

Cats were always a part of our family, including those we adopted from the shelters over the years, but when we got to know a Ragdoll, we could not help ourselves and fell in love with the breed, as I am sure you will also. 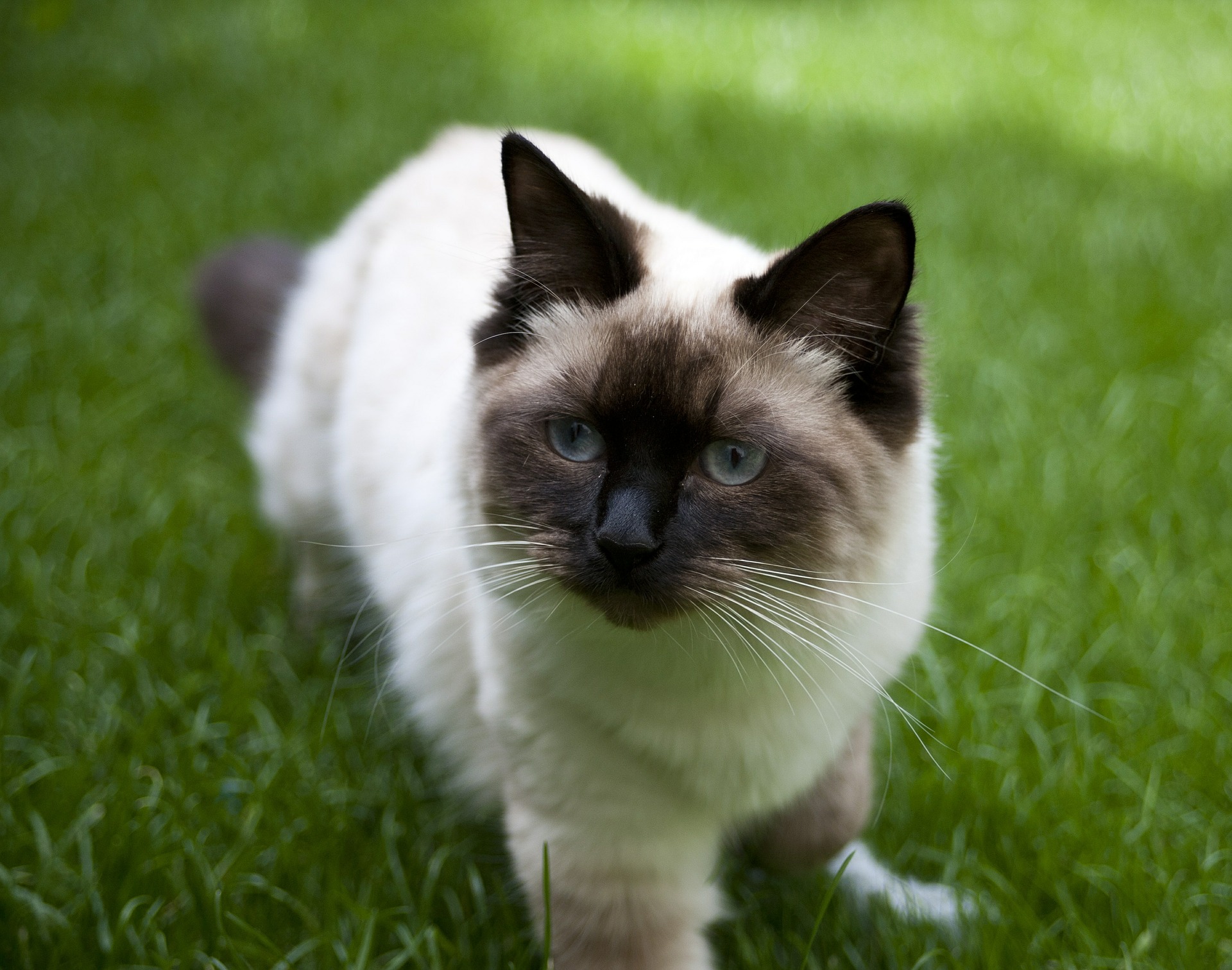 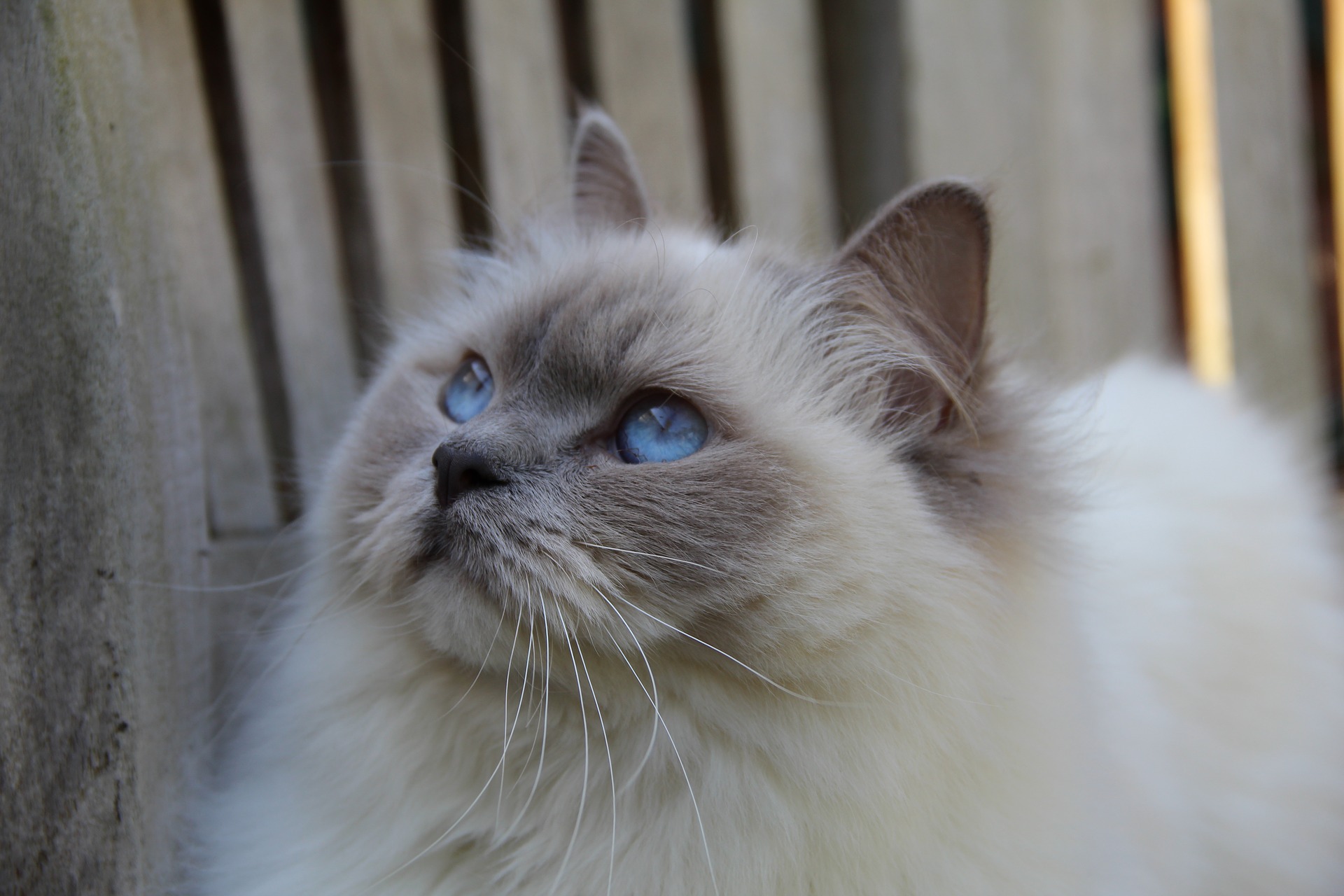 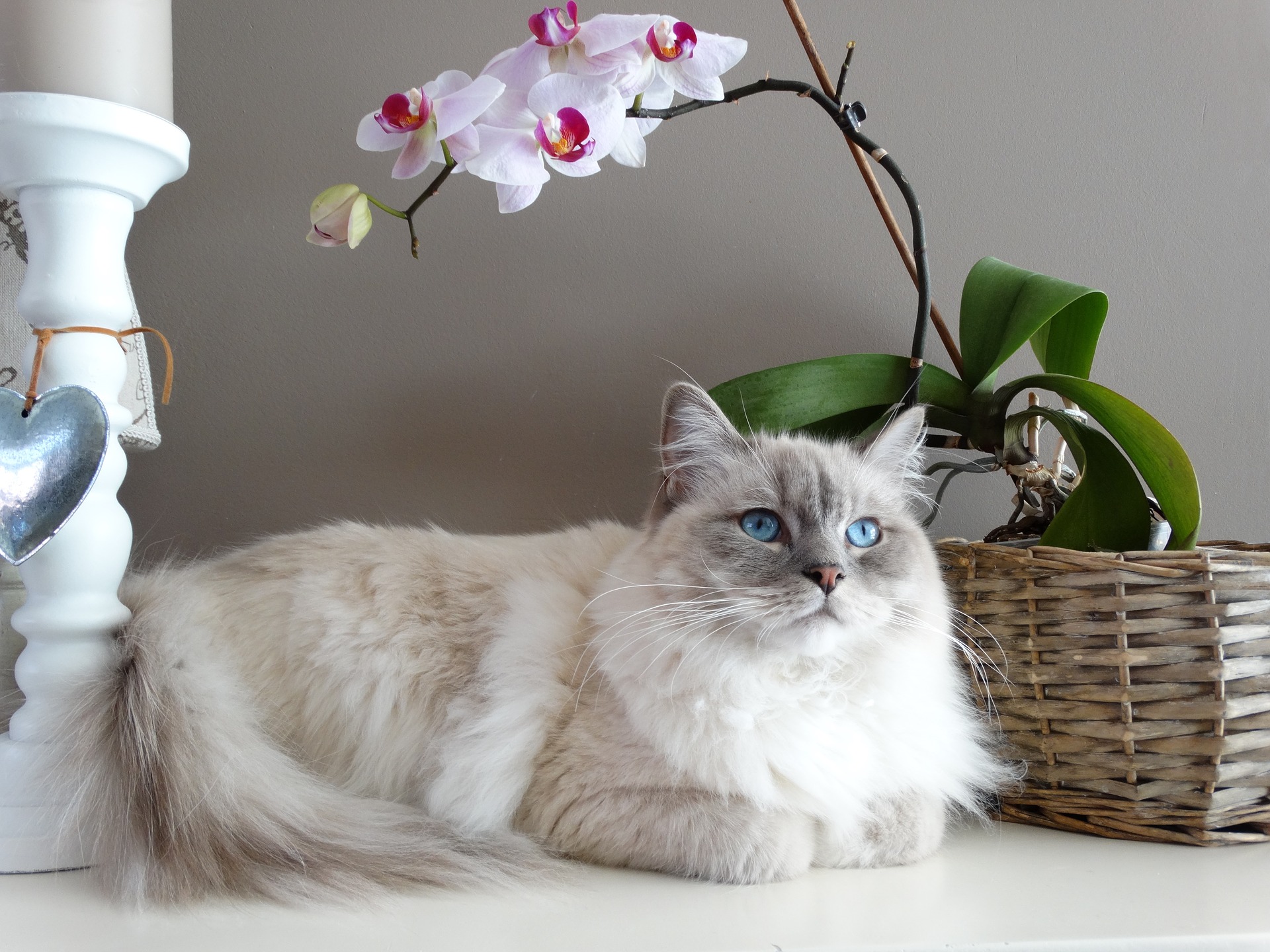 Ragdolls are large, laid-back, semi longhaired cats with captivating blue eyes. The Ragdoll is a pointed breed, which means that the body is lighter in color than the points (the face, legs, tail and ears). The Ragdoll cat is carefully bred to produce large affectionate animals in three patterns, two with white (mitted and bi-color) and one with no white (colorpoint). The ideal Ragdoll is a well balanced cat, with no extreme features. Altered males will usually top the scale at 9 to 10 kilos; females are proportionately smaller and usually weigh between 4.5 to 6.5 kilos at maturity. Ragdolls are slow-maturing, reaching full coat color at two years, and full size and weight at four.
Ragdoll cats tend to be more interested in humans than some breeds of cats. They are known to run to greet you at the door, follow you from room to room, flop on you, sleep with you, and generally choose to be where you are. Many Ragdolls have been taught to come when called and play fetch.

They are gentle cats, and usually play without extending their claws. Ragdolls tend to be floor cats, not jumpers. The Ragdoll’s semi long coat is plush and silky, and requires minimal grooming to keep it looking its best. They should be combed with a steel comb on a regular basis to find and remove any loose hair or tangles. Quality coats consist mainly of long, soft guard hairs. Ragdolls, just like all breeds of cats, will shed, usually with the change of seasons.The absence of the thick, dense, insulating undercoats results in reduced shedding and matting. In all, Ragdolls are well behaved, and easy to care for – perfect for our modern, busy, lifestyles.
There are four patterns: bi-color, van, mitted and colorpoint. Patterns come in six colors: seal, blue, chocolate, lilac, red, and cream. Points may be solid, lynx, tortie, or torbie (tortie and lynx). If you do the math, you can see that there are quite a large number of different combinations possible!

Colorpoint Ragdolls have the classic pointed markings with no white anywhere in their coat. Mitteds have white feet in the front and white boots that go all the way up and around the hock in the back, a white chin and belly stripe. Mitted Ragdolls may have a blaze, star or hourglass shaped patch of white on their forehead and nose. Bi-colors have more white; all four paws, their underbodies, chest, and an upside-down ‘V’ marking on their faces are white. They may have a splash or two of white on their backs. Only their tails, ears, and the outer part of their masks show the darker markings. In the Van pattern, only the top of the mask, ears, and tail, and perhaps a few spots on the body, show darker markings.

Ragdolls were developed in the 1960’s by Ann Baker; a breeder in Riverside California. The origin of the Ragdoll breed consisted almost entirely of free-roaming cats. Ann bred Josephine, a domestic longhaired white female that was found running loose in her neighborhood, to other cats she owned or found. The offspring of this female had unique temperament traits that were very endearing. By selecting individuals with the look, temperament and criteria she wanted for her breeding program, she created the Ragdoll breed.

The Ragdoll loves to be cuddled and is much more accepting than many cats of being carried around in his owner’s arms. The large, affectionate Ragdoll goes limp with pleasure when you cuddle him in your arms, the trait that led to his name. He’s a big kitty, with males ranging up to 20 pounds, females slightly smaller, starting at 10 pounds and going up to 15 pounds.
The Ragdoll gazes up at you with beautiful baby blues, eager to follow wherever you go. He’s a friendly cat who will greet you happily at the door, play fetch and sleep with you at night. Sturdy and tolerant, he can be a child’s best friend, willing to be dressed up in doll clothes and pushed around in a baby buggy. Just make sure your child doesn’t take advantage of his good nature. The laidback Ragdoll can even get along well with dogs and, like them, can learn to walk on a leash. He’s a great choice if you travel frequently and would like to bring a feline companion along.
The breed was created in the 1960s from matings of three cats of unknown heritage. Today the semi-longhaired cats come in four patterns (mitted, van, bicolor and colorpoint) and six colors (seal, blue, chocolate, lilac, red and cream) for a variety of looks in the breed. The cats mature slowly, reaching their full size when they are four years old.
The Ragdoll is well suited to any home with people who will love him and give his gorgeous coat a weekly combing. Keep him indoors to protect him from cars, diseases spread by other cats and attacks from other animals.

Description of their temperament

Ragdoll’s are large, bulky and handsome cats. They have been commonly referred to as “the gentle giants” – because in spite of their handsomeness and grace, they are extremely even-tempered and docile.

Able to steal your heart and make you wonder exactly who owns who, Ragdoll cats quickly adapt. They fit right into your life and fill it with “Ragdoll Magic!”

Ragdoll cats charm their owners with funny, as well as tender moments. The character traits of this breed alone makes it special! However, the physical aspects, build, and “looks” of the breed will further impress your fancy.

Originally, as the Ragdoll breed was introduced to us by Ann Baker, it consisted of 3 distinct color patterns. Since then, through careful consideration and monitored breeding, the breed expanded.

They are loving, placid and easy-going, quiet cats.

Ragdoll’s love being with people. This makes them excellent companions for children and adults alike!

Ragdoll’s are not “fighter” cats. They view any on-comer as a loving entity. For this reason, Ragdoll’s are strictly indoor cats.

retrieving toys, loyalty to its owner, following you around everywhere, attention to what you are doing all the time and being very devoted to you.